Well, Roger's been in Eldoret all morning working with the KRA (Kenya Revenue Authority).

Good news first.  Roger won't be arrested.  That was our first priority afterall.

The rest is looking like bad news.  The vehicle is almost definitely illegal.  Bummer.  That means, that the person who okay'd its import into the country was a crook and probably pocketed the duty money.  Bottom line is that the vehicle is supposed to be impounded and actually destroyed, so we're out a very large sum of money.

It seems a law was passed in 2003 that vehicle older than 8 years old were not allowed to be imported into the country.  Ours was imported in 2007 and it is a 1991 vehicle.  Roger was told that often times, because Kenya is a coastal country, cars come into the country "in transit" to other countries like Uganda, which have no such laws.  Then criminals get them and sell them.  The first lady Roger talked to at the KRA took one look at our log book and said, "Yup, that's a fake."  She knew because they stopped issuing that kind of log book in 2006 and the date on our log book is 2007.

At this point, I would ask you to please start praying for a vehicle for us.  And start praying for the money to buy a vehicle.  They are very, very expensive here because of import and duty taxes (which are 50 - 60% of the value of the vehicle). And even when you buy a vehicle that has already been imported, that duty is rolled over into the price you pay. Single people can get by without a vehicle here, but once you have a spouse and/or children, it gets a lot more difficult - especially with Emily at boarding school 6 hours away.  Public transportation isn't always a possibility, and there are times we have to be in Nairobi - if we use public transportation while in Nairobi, it costs us a fortune.  Also, here, to get a taxi, you often have to wait a very long time because they will tell you they are on their way, when they are 45 minutes away.

In fact, we are supposed to take Emily back to school in just 3 weeks and we are supposed to stay in Nairobi and get some medical things taken care of as well as passport things with the Embassy.  I don’t know if that will be able to happen now.

Well, that's the news for now.  I know God is still in control.  He has a purpose; I don't' know what it is yet, but we have to trust Him.  It doesn't mean the circumstances don’t stink though. I'm reminded of a verse in the Bible, "Rejoice always, pray without ceasing, in everything give thanks; for this is the will of God in Christ Jesus for you."  I Thessalonians 5:16-18   I am also reminded of this one, "...but we also glory in tribulations, knowing that tribulation produces perseverance; and perseverance, character; and character, hope.  Now hope does not disappoint, because the love of God has been poured out in our hearts by the Holy Spirit who was given to us."  Romans 5:3-5

Please pray for our attitudes.  Roger is discouraged that we're out so much money (on top of that, he had to deal with dishonest public transportation people on the way home.  If you want that story, see the PS down below).  It's not like we have money laying around to buy another 4-wheel drive vehicle.  All the money we put into that vehicle is just...gone.  POOF.  And I'm a little angry at the moment on a couple of different fronts, one being the corruption that allowed this to happen.  Pray that we continue to entrust ourselves to God, who judges rightly.  He knows that we are victims in this whole situation.  He sees.  He will supply our need - maybe not by our definition of need, but by His, and His is the correct one.

If anything changes, I'll let you know.
In the mean-time, thanks for all your prayers!!!!

In Christ - Held by His Grip (so glad its not dependent on my grip!)
Julie

P.S.  So, Roger just got home and told me a heart-warming story of corruption on a much lower level.  Roger used public transportation to get to Eldoret and back today.  It costs 200/=  (that’s 200 Kenyan shillings).  On the way back, he sat down on the shuttle and when the lady came by to give him his riding ticket, it was a fake ticket that said 300/= on it.  Roger gave it back to her and told her she was a thief for trying to steal from the white people (that’s what they call us, by the way).  He told her that he’d ridden this shuttle 5 times in the last 3 weeks and he knew exactly how much it should cost.  She denied trying to steal from him and blamed it on another guy who had written the ticket.  She went away and then returned with the proper, official ticket with the correct price on it.  She even told him it was an official ticket.  So, Roger pointed out to her that she knew the other ticket was fake, and so that made her a thief as well.  He asked her if she was a Christian, to which she answered, “yes.”  He then asked her if she knew what the Bible says about stealing.  At that point she started pretending to not understand his English, and another Kenyan man standing there said, “I don’t think she understands you.”  So, Roger said, “Oh, you don’t understand my English, well then,  I’ll speak in Kiswahili,” which he proceeded to do much to her surprise.  She turned and walked away at that point.  So, this is just a taste of what we live with day in and day out, and it is why we really need your prayers – prayers for love and patience in our hearts.
Posted by Julie at 6:31 PM

The family remaining in Kenya 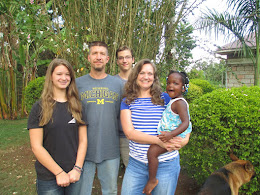 A Few out of so many I know Who Make a Difference...

Julie
"God is most glorified in me when I am most satisfied in Him." - John Piper